Who is a better driver - a man or a woman 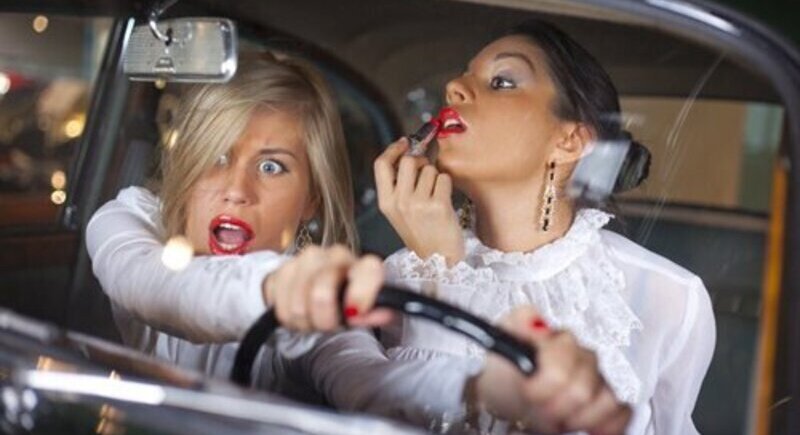 One of the eternal disputes between men and women is who are the better drivers. But let's see if anyone really leads in the result.

Women, for example, can't just sit and walk. This is a whole ritual. What is a trip without fresh drinks to eat? And without the lucky driving mascots, they can't be sure that they will arrive without accidents.

His wife drove so badly that her GPS told her:
"After 50 meters turn right and stop - to get off!"

Men, they are something else. Coffee, phone, keys! And if they have forgotten something, "bless" it, and leave ...

When Gosho saw that the neighbor's car was being stolen, he did not hesitate for a second, ran out into the street and parked in the vacated space.

When women are on the road, they are extremely resourceful and driving becomes an art. They create on themselves with make-up, and sometimes they try to improve their mind - we have seen ladies reading a book at traffic lights. In addition, selfies are often posted on Facebook while driving, with a comment on the photo: "I feel crazy, I'm driving a stroller."

Men can do 100 things at a time in the car - talking on the phone, lighting a cigarette. They do not forget to enjoy the view while driving - they will stare at the beautiful girls who walk. Men also very often take selfies from the car or photos of the car itself, or the speed they have raised.

Of course, parking is also a very important part, but some may be overemphasizing it. It is an absolute myth that ladies find it difficult to park. On the contrary, they are fakirs. Even if they have obstacles, they will not give up ... ever. And men can only be angry that they can't.

Between girlfriends:
- Did you take the driving test?
"I don't know, the instructor hasn't regained consciousness yet."

Did you know that in Seoul, the city authorities have introduced extra large parking spaces for drivers with parking difficulties. The measure is not considered discriminatory for the fairer sex, but as a facilitation. The parking spaces are twice as wide as normal, have a symbol of a woman with a miniskirt, and in addition to the yellow boundary lines, they also have a pink color.

But the traffic police chief had said that women were better drivers: "Yes, they will break a mirror, a headlight, bend a sheet metal, but at least they will stay alive because they drive slowly."

If an accident does occur, don't use these excuses that some drivers have tried in front of the traffic police, and we found on the net:

"I started to slow down, but the cars in front were more stationary than I thought."

"Leaving for work at 7 o'clock this morning, taking the car out of the garage on the street, I collided with a bus. The bus was 5 minutes early. "

"The car in front of me hit the pedestrian, but he stood up, so I hit him too."

"The other car collided with mine without warning."

"I hit a stationary truck coming from the other side."

"The pedestrian hit me and went under my car."

"An invisible car appeared out of nowhere, hit my car and disappeared."

"I was thrown out of the car when it veered off the road. I was later found in the ditch by some cows. "

"I thought my window was down, but I found it up when I stuck my head through it."

Never stop because of a pedestrian unless he throws himself under your car.

The first spotted parking space will be the last. Borrow it in a flash.

Always look left and right when crossing a red light.

Never use turn signals when changing direction. They only warn other drivers to accelerate and prevent you from maneuvering.

Eye contact with a driver of the opposite sex takes away your advantage.

Whenever possible, stop in the middle of the sidewalk to block as many pedestrians as possible. And if one of them steps on the zebra in front of you, give gas and horn until you drive him back to the sidewalk. Pedestrians are illegal participants in traffic.

Park on the sidewalks whenever possible so that pedestrians are forced to take to the streets. There, the other drivers will take care of them.

Finally, we can summarize that there are good and bad drivers among both men and women. But the important thing is to be careful and tolerant on the road.